Atherstone has a long and colourful history dating back to Roman times. An important defended Roman settlement named Manduessedum existed at Mancetter near the site of modern day Atherstone. The Roman road “the A5” originally Watling Street ran through the town. It is believed by some historians that the rebel Queen of the Britons, Boudica was defeated at the Battle of Watling Street by the Romans in her final battle near Manduessedum.

Atherstone also has an entry in the Domesday Book of 1086, records show that Atherstone was held by Countess Godiva.

The ancient St. Mary’s Chapel in Atherstone dates from the early 12th century when the monks of Bec made a donation of 12 acres (4.9 ha) to a house of friars and hermits, later referred to as “Austin friars”.

It is said that the Battle of Bosworth actually took place in the fields of Merevale above Atherstone. Certainly reparation was made to Atherstone after the battle and not to Market Bosworth.

In Tudor times, Atherstone was a thriving commercial centre for weaving and clothmaking. The town’s favourable location laid out as a long ‘ribbon development’ along Watling Street, ensured its growth as a market town.

By the late Tudor period Atherstone had become a centre for leatherworking, clothmaking, metalworking and brewing.  Local sheep farmers and cattle graziers supplied wool and leather to local tanners and shoemakers (an industry that continued until the 1970s), while metalworkers, locksmiths and nailers fired their furnaces with local coal and the alemakers supplied thirsty palates on market days. 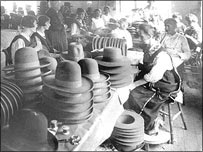 Atherstone was once an important hatting town, and became well known for its felt hats. Atherstone has been a centre for hatmaking since Tudor times.  At its height there were seven firms employing 3,000 people. Hats from Atherstone were sent all over Britain and further afield, around the world to British colonies.

Links to the slave trade

One of the largest markets for the Atherstone hatting industry was to equip black slaves in the West Indies and America. Slaves wore a hat called a billycock, which was similar to the kind of hat that was worn by the British army.

It was production of these hats that helped keep the Atherstone hat trade buoyant. They were easy and cheap to make in large quantities and could be worn in all weathers. Another advantage was that they could be made by men who were not yet fully skilled. 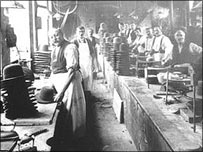 When the emancipation of slaves took place at the beginning of the 19th century it had a major impact on the Atherstone hat trade.  Owners of West Indian and African slaves had been required to provide them with hats, so purchased large amounts of the cheapest felt hats available.  When this lucrative market dried up it left a significant dent in the sales figures of Atherstone hat manufacturers.

“I do believe that the Atherstone hat trade suffered a major impact from the abolition of slavery” says local historian and author Judy Vero. “One only has to look at the records for 1833-4, especially the Vestry Minutes for Poor Relief to see the hardship of the time.”

The billycock was the staple hat made by Atherstone hatters. Even though many other hats were made, the billycock was the most common and provided a regular and steady income for those who made it.  The origin of the name billycock is thought to come from the term ‘bully cock’, which was used to describe a hat cocked after the fashion of bullies. 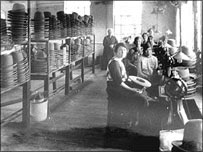 In her book ‘A Concern In Trade”, Judy Vero tells us that her relative James Vero had claimed on his

deathbed in 1898 that the name came from his grandfather who was called William.   Vero states that the billycock was “made from Cock or Italian wool, with a round crown and curled brim 2-2½ inches wide, weighing 4-5 ounces. The hat was not dyed but had a narrow tape binding and a glazed cotton lining.”

Eventual decline of the industry

Despite the end of the slave trade, the Atherstone hat industry did remain reasonably healthy throughout the 19th century, mainly on account of the large amounts of wars and conflicts that required cheap headwear for soldiers.

Indeed, the initial impact of the the end of the slave trade was offset by the major 19th century conflicts such as the Napoleonic and Crimean wars.

The real decline did not set in until the aftermath of the Second World War. Despite booms and troughs caused by fashion, the market remained on a downward trend. In the 1970s only three hat factories remained in Atherstone – Denham & Hargrave, Vero & Everitt and Wilson & Stafford.

In the 1980s as the market contracted further, Wilson & Stafford bought out the other two firms, but could not continue much longer. The Wilson & Stafford factory survived for another decade and was the last to close in 1999.

Town turns out for annual event in Atherstone